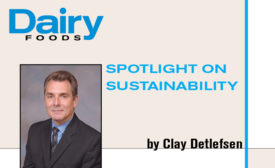 The EPA notes that nutrient-recovery technologies provide palpable and verifiable nutrient reductions, which can allow for the elimination of the uncertainty ratios.
Clay Detlefsen

Water quality trading (WQT) was introduced in the 1960s, and it’s a great concept. Since its introduction, WQT has been tried approximately 60 times around the world, but mostly here in the United States.

Food for thought: use nutrient trading to improve water quality

Despite years of progress, more than half of the nation’s waterways still do not meet water quality standards.
Clay Detlefsen

Nutrient trading, also known as water quality trading (WQT), is a major issue for the U.S dairy industry, though many probably do not realize that yet.