However, high shipping costs and COVID-19 have slowed exports to other countries.

Over the past six months, most discussions around global dairy trade have centered on incredibly strong Chinese imports and freight costs and delays. Both topics are going to remain discussion points for the second half of the year, but import demand from other countries will likely start to factor into more discussions as well.

First, let me talk about logistics. With consumers unable, or unwilling, to spend disposable income on services such as restaurant meals, travel and trips to the theater, they have been buying more physical stuff. Much of that stuff is imported, which has led to strong demand for containers and ships to carry those containers.

Throw in a ship getting stuck and blocking the Suez Canal (blocking 12% of global trade) for six days and COVID-19 outbreaks at ports that have slowed loading and unloading of ships, and you end up with freight costs more than doubling (depending on the route) and delays building up around the world.

Looking at U.S. dairy exports, it is hard to see much of an impact. There was a record amount of nonfat dry milk and cheese exported in the first half of 2021. But it is costing more to get those products to the consumers, and that might be slightly depressing U.S. prices relative to other regions.

Early this year, there was some optimism that the logistics problems might clear up by July or August. Now it looks like it will take until late this year at the earliest. 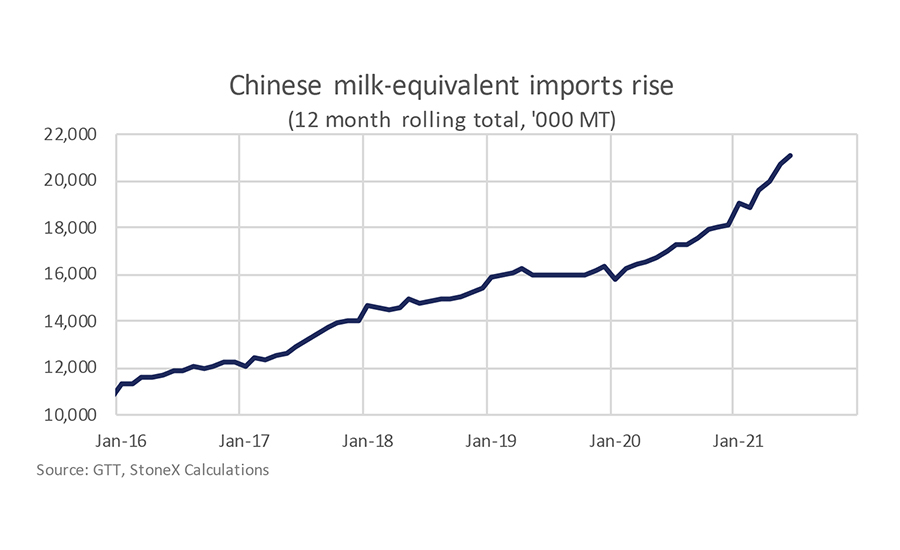 China is the largest importer of dairy products, and on a milk-equivalent basis, its imports were up 32.2% during the first half of 2021 compared to 2020. That is incredible growth, both in percentage and volume terms.

It has absorbed roughly 70% of the milk production growth across the major exporting countries this year. The buying spree pushed global dairy trade prices up about 27% between January and May, although prices are now down about 8% from the peak.

The surge in demand seems to be driven by a couple of factors in China. The biggest factor seems to be the health halo that has been placed on dairy in the country. Even a leading public health official has made public statements that consumers should be taking in more dairy products to help their health.

Not so rosy outside China

While Chinese imports have been fantastic this year, if you remove them from the picture, things aren’t looking so hot. Imports by everyone else were down 2.4% during the first half of 2021.

Some buyers stocked up in mid-2020 and have been working down those inventories. Other importers are still dealing with the fourth or fifth wave of COVID-19, and their domestic demand is still on the weak side. When you combine that with dairy prices that rallied 27% and high shipping costs, importers have largely been hesitant.

As vaccination rates continue to trend higher around the world, working inventories run low and dairy prices adjust a little lower, buyers are expected to come off the sideline. However, it might take until Q4 to really see global demand outside of China step higher.

While export logistics are more of a headache than usual, and Chinese buying will likely slow down, the overall export picture still looks good with other buyers expected to come back into the market. The United States is currently well positioned with plenty of available product at competitive prices.