Chobani gets ready for its close up on Oscar night

Chobani is big, even if the pictures have gotten small. 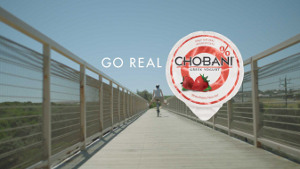 Dairy Foods 2012 Processor of the Year Chobani plans to debut a new advertising campaign on Sunday, Feb. 24 during the 85th Academy Awards show (the "Oscars").

The Greek yogurt maker said in a statement that it wants "to empower consumers to choose a brand that stands for something more – an authentic strained yogurt that's made with only natural ingredients by people who have passion for bringing better food options to the masses."

"The creative inspiration for the television spots was sparked from the hundreds of real moments Chobani fans share through their social media channels on a daily basis," said John Connors , CEO of Boathouse, which developed the campaign. "These photos and stories are similar to the ones you would share with your own family – dogs and cats getting the last licks of yogurt, creative recipes, and photos of their kids. We're amplifying those real stories though this creative to give more people the chance to engage in the conversation around Go Real Chobani."

A digital and social media campaign across Facebook and Twitter asks fans to share their memories of the first time they tried Chobani. The resulting images, tweets and posts will be aggregated digitally via #tastereal to create an interactive content mosaic which will live online at Chobani.com.

In a statement, John Heath, Chobani's interim chief marketing officer and senior vice president of innovations said, "Go Real Chobani is an articulation of our company's overall mission and brand essence," said "The creative work exposes the heart and soul of who we are as a company and a community. It's important to us that consumers know the real people behind our products and understand the care and craftsmanship that goes into each and every cup."

Go Real Chobani was developed by Boathouse and will be supported by Chobani agencies Big Spaceship and Fleishman-Hillard. In addition to TV, digital and social media, the multi-million dollar campaign will include national print, out of home advertisements and other targeted advertising, on-pack, experiential marketing and public relations.