Chobani held the official openingtoday of what it calls the world's largest yogurt manufacturing facility (photo, above). The nearly 1 million-square-foot plant in Twin Falls, Idaho, was completed in 326 days. Groundbreaking was held in December 2011 ( photo below) and construction began in January 2012. 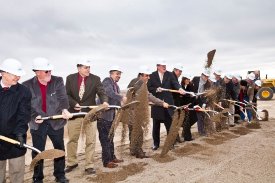 In a conference call with reporters today, Chobani executives Kyle O'Brien, Stephen Dean and Tim Seaton talked about new products the plant is manufacturing and that will be available in 2013. The capabilities at the plant allow for the manufacturing of products with texture, such as nuts and coconut pieces.

Among these products are 5-pound and 25-pound pails for foodservice accounts. Dean, the vice president of sales for foodservice, said the large formats are the result of requests from customers. Chobani wants its products to be used as an ingredient in recipes. He added that a test kitchen in Charlotte, N.C., is developing recipes using Greek yogurt.

New products for 2013 include Bite, positioned as a snack (instead of a breakfast food). Flavors include fig with orange zest and dark chocolate chip with raspberry. Flip, sold in 5.3-ounce packages, is a yogurt with mix-in inclusions. An example is Key Lime Crumble. Chobani will introduce a pear-flavored Greek yogurt in its 6-ounce cups as well as a banana flavor next year, as well. Research and development is sometimes no more complicated than walking the produce department of a grocery store and seeing what shoppers are buying, the Chobani executives said.

In response to a question from Dairy Foods, O'Brien said Chobani will develop non-Greek-style yogurt products and a frozen Greek yogurt product. The company is looking for "great ideas outside of Greek yogurt," he said.

When Chobani sought a location for a new plant, the criteria included available of milk, water, water treatment and power. Dairy Farmers of America is supplying the milk. The plant cost $450 million and it will have an estimated $1.3 billion economic impact on the region. The plant is using form-fill-seal packaging technology, and Chobani will be converting 3.5-ounce cups of Chobani Champions to the FFS line.