But the majority of Americans recognize the need for the government to help dairy farmers in some way.

WASHINGTON, Nov. 28, 2012 /PRNewswire-USNewswire/ -- A new nationwide survey released today found that 81 percent of Americans agree that individual farmers should have the freedom to decide how much milk they produce and not have a limit set by government policy.
The survey, which was conducted online last month among 2,094 adults by Harris Interactive on behalf of the International Dairy Foods Association, also found that 74 percent of Americans believe milk prices should be based on what consumers are willing to pay. Only nine percent think milk prices should be set by government policy. 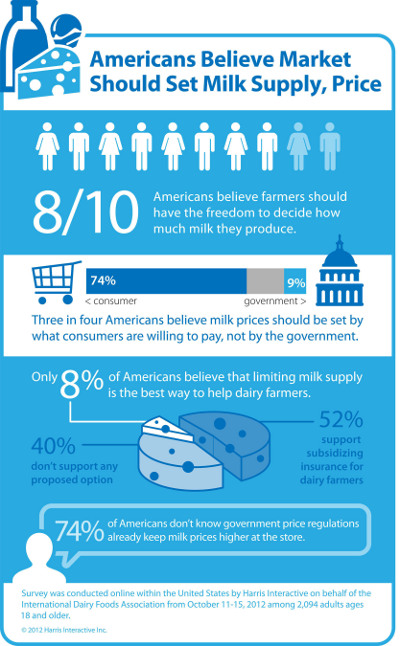 "It's clear Americans feel strongly that the federal government should stay out of the milk pricing business," said Connie Tipton, IDFA president and CEO. "Dairy is a dietary staple and a primary source of essential nutrition to tens of millions of Americans. Artificially raising milk prices by manipulating the market, as proposed in the Farm Bill's Dairy Security Act, hurts consumers and it hurts taxpayers," she said.

Recognize Dairy Farmers Need Support
The majority of Americans recognize the need for the government to help dairy farmers in some way. The survey found 52 percent of Americans support providing financial assistance through government-subsidized insurance -- frequently referred to as margin or risk management insurance -- to protect farmers against catastrophic losses. Only eight percent say farmers should be helped by government policies that would keep prices higher by limiting how much milk farmers produce. Forty percent of Americans don't support either option.

Current proposals in the Farm Bill would require farmers to limit the milk they produce in exchange for access to margin insurance. The Goodlatte-Scott Amendment, a proposal that would provide insurance coverage while not restricting farmers' ability to decide how much milk they would produce, is expected to be considered when the House of Representatives takes up the Farm Bill.

"Goodlatte-Scott provides an option that benefits farmers, consumers and taxpayers," Tipton said. The amendment represents an opportunity to allow dairy industry growth. It would not penalize dairy farmers if they increase production, and would help keep U.S. dairy product prices more competitive in the world market."

Believe Milk Pricing Should Be Market-Based
The survey also found that 74 percent of Americans are not aware that government price-setting regulations already keep the price of milk at the store higher than the price would be without the regulations.

"Milk pricing is still based on outdated regulations developed in the 1930s that have no connection with today's markets," Tipton said. "The reality is that every time a family buys milk, they pay a surcharge and gain no added benefit."
About the Survey

This survey was conducted online within the United States by Harris Interactive on behalf of IDFA from October 11 - 15, 2012 among 2,094 adults ages 18 and older. This online survey is not based on a probability sample and therefore no estimate of theoretical sampling error can be calculated. However, propensity score weighting was used to adjust for respondents' propensity to be online.

About IDFA
The International Dairy Foods Association (IDFA), headquartered in Washington, D.C., represents the nation's dairy manufacturing and marketing industries and their suppliers, with a membership of 550 companies representing a $110-billion a year industry. IDFA is composed of three constituent organizations: the Milk Industry Foundation (MIF), the National Cheese Institute (NCI) and the International Ice Cream Association (IICA). IDFA's 220 dairy processing members run more than 600 plant operations, and range from large multi-national organizations to single-plant companies. Together they represent more than 85% of the milk, cultured products, cheese and frozen desserts produced and marketed in the United States. IDFA can be found online at www.idfa.org.