Milk is a go-to beverage for young children

Healthy eating patterns are important at all stages of life, but especially during early childhood when children are building the foundation for lifelong health. In these early years, beverages contribute significantly to children’s overall consumption and nutrient intake, which makes choosing the right beverages critically important.

With so many options available, knowing which beverages are nutritious can be challenging for parents and caregivers. Fortunately, prominent health authorities led by Healthy Eating Research under the Robert Wood Johnson Foundation released a new consensus report, providing clear and simple recommendations to make beverage selection for young children easier. The consensus report’s findings offer good news for the dairy community.

The report recommends water and milk as the go-to beverages for children ages 1–5, affirming dairy’s important role in children’s health and development.

Leading experts agree that milk is an important dietary source of protein, calcium and vitamin D for young children.

“Milk is the number one source of energy, calcium, vitamin A, vitamin D and zinc for infants and young children, making it a critical component of a healthy diet,” the report states.

Additionally, the report recommends limiting 100% fruit and fruit/vegetable blended juices, encouraging fruit consumption instead when possible. It continues by explicitly listing beverages the experts do not recommend for young children due to the lack of unique nutritional value, including:

Other beverages. Flavored milks, toddler formulas, low-calorie sweetened beverages and caffeinated beverages are cautioned against. Any added sugars, even in limited amounts, should be avoided in early childhood to prevent early establishment of preference for sweetness. 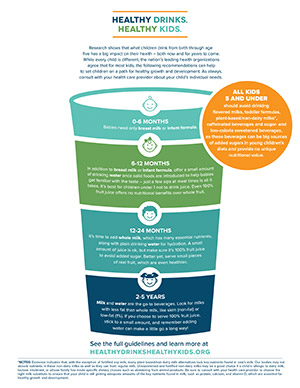 Having four health organizations of this merit come together to recommend beverages for children in early childhood is significant and timely. The report will likely be referenced by key public health stakeholders in policy development and advocacy, especially as it coincides with the development of the 2020–2025 Dietary Guidelines for Americans, which for the first time will provide dietary guidance
for infants and toddlers from birth to 24 months.

Despite strong evidence of the value of consuming healthy beverages, many children are not drinking beverages that follow evidence-based recommendations. For example, nearly half of 2- to 5-year-olds, or 44%, consume at least one sugar-sweetened beverage each day, and the prevalence of consumption increases throughout childhood.

The Centers for Disease Control and Prevention reports that about 13.7 million U.S. children and teens are considered obese, increasing risk for chronic diseases such as type 2 diabetes and cardiovascular disease both during childhood and later in life, which also could increase health care costs for families.

Encouraging healthy beverage consumption every day — which includes milk — is one way families and caregivers can help ensure children are adequately nourished and supported for optimal growth in their early years and given a healthy foundation to set them on a lifelong path of healthful living.

Everyone plays a role

The report provides a roadmap to the best beverages for parents, families, caregivers, childcare providers, community centers and foodservice institutions, which all play a critical role in children’s lives. It also provides dairy farm families and milk processors with an opportunity to reaffirm dairy’s important role in children’s growth and development.

The dairy community can share evidence-based nutrition recommendations — such as those in the report — with friends, families, schools and communities. Healthy Eating Research provides resources such as fact sheets, talking points, email templates, social media and website content at no cost. Resources can be found at healthydrinkshealthykids.org.

For 100 years, the dairy community has believed in the power of nutrition education, supporting Dairy Council of California’s efforts to elevate the health of children and families through the pursuit of healthy eating patterns and to ignite a passion for consuming milk and dairy foods. In addition to educating children and families in California and beyond, Dairy Council of California monitors emerging nutrition science trends, research and reports, including the release of new guidelines such as the beverage recommendations. It leverages these findings to inform and empower educators, health professionals and community leaders toward advocacy.

A call to action for milk processors (and dairy farm families): By amplifying the report and other health-related research and nutrition education in your community, you can help ensure children and families are drinking the right beverages to make lifelong optimal health possible.

Tammy Anderson-Wise is the CEO of the Dairy Council of California, Sacramento, Calif.