This website requires certain cookies to work and uses other cookies to help you have the best experience. By visiting this website, certain cookies have already been set, which you may delete and block. By closing this message or continuing to use our site, you agree to the use of cookies. Visit our updated privacy and cookie policy to learn more.
Home » Murray’s Cheese shop, a Greenwich Village icon, comes to California
Dairy Processor News
Cheese shop

New Yorker Rob Kaufelt has been proprietor of Murray’s Cheese Shop, the Greenwich Village icon of New York’s culinary scene he created, since 1991, and was pivotal in helping shape a craving in New Yorkers for cheese beyond the generic orange stuff. In doing so, he effectively created the retail specialty cheese category in the United States, according to the company. 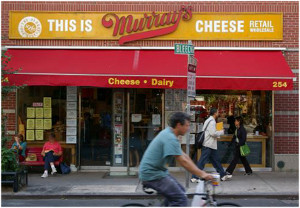 In January, Kaufelt opened his landmark 100th Murray's shop in Studio City, Calif., bringing his cheese vision across the country. It was just five years ago that Kaufelt took his original leap beyond the Hudson River and his two small New York City cheese shops. He did it by partnering with The Kroger Company, the country's largest grocery store chain. Murray’s is the only specialty cheese retailer to achieve a national presence, and to influence the country’s biggest supermarket chain to carry more local items — advocating for American farmstead cheeses.

Kaufelt’s cheese empire now extends from New York, Michigan and Indiana all the way to the Left Coast, with celebrations going on in all 100 stores today. In addition, Kaufelt expects to open 60 more Murray’s in supermarkets across the country this year.

Each mini-Murray’s shop embodies Kaufelt’s vision, including Murray’s own famed cave ageing and his renowned quality control, coupled with the easy accessibility of a major supermarket. For each location, Kaufelt personally helps his buying team source his favorite local cheeses. Murray’s kiosk offers almost as many cheeses as the original Murray’s in New York — close to 200, plus many locally-made products as well.

Kaufelt is committed to education. Every new Murray’s master cheesemonger across the United States must make the trip to the New York store where Kaufelt personally helps train them in the Murray’s way. And then there’s the cheese exam to pass after before they are allowed to don the signature red jacket.

After 20+ years in, Murray’s 100th store highlights these milestones for Kaufelt: