The equipment cuts vents into shrink-wrapped bundles of cultured dairy products, allowing high-pressure refrigerated air to mix with the warm air emanating from the packaged product so the product cools quicker.

For Cabot Creamery Cooperative, fresh is best. That’s why the company is using the new KwikCool Induction Unit developed by Delkor Systems Inc. to shave off as much as 30% of the time required for its cultured dairy products to cool between packaging and shipping.

“If we can save a day in the cooling process, that means our product is one day fresher for our customers,” says Marcel Gravel, plant manager for Cabot Creamery, a dairy cooperative based in Cabot, Vermont. “Cooling the cultured product quickly creates better quality and longer shelf life.”

Using Delkor’s patent-pending invention, Cabot has also been able to reduce the work-in-process at its facility and increase throughput. At the same time, Gravel says, the dairy manufacturer has seen proportionate energy savings for each case of cultured product in the 80,000-square-foot refrigerated facility in which the product is cooled to the proper shipping temperature.

Cabot is best known for its cheddar cheese, which is distributed nationally. However, the co-op manufactures and distributes a number of other dairy products, including butter, cottage cheese, sour cream, Greek yogurt and flavored dips. These products are distributed regionally, primarily in New England and along the Eastern Seaboard.

The Cabot Farmers Cooperative Creamery was launched in 1893 by 94 farmers as an outlet for the milk they produced. Later, the group began making butter with the excess milk. In 1930, they added cheese, now the best-selling product, to their lineup. The co-op merged in 1992 with Agri-Mark, a cooperative of 1,800 farm families in New England and New York and is now a subsidiary of Agri-mark.

During the processing stage of production, the temperature of cultured dairy products can be raised to 50° to 90°C, Gravel says. This is done to facilitate homogeneity, reduce viscosity or to destroy pathogens. Perishable goods such as cultured dairy products can be spoiled by transient periods at even moderate temperatures, so rapid cooling of the final package is of critical importance.

Gravel says the packages must be cooled to at least 45° F or cooler before they can be shipped. This can take up to 72 hours, depending on the container size, type of secondary packaging, pallet patterns and refrigeration temperature. On larger containers, he adds, cooling time has been cut by as much as a full day. Cabot uses a puck-shaped recorder that is placed inside pallets to determine when the product has reached the shipping temperature.

The cultured products are filled into a variety of plastic containers ranging from 6 oz. to 32 oz, says Terry Johnson, cultured packaging supervisor at Cabot. The containers are then conveyed to a Delkor Spot-Pak loader, where they are placed on flat, corrugated pads and held in place by a temporary bond adhesive while they are shrink-bundled for shipment.

The film conforms tightly and completely around the packages when they pass through a heated shrink tunnel, creating a barrier that protects the products inside as well as a unitized bundle for handling and transport, says Kevin Weiss, Delkor product line manager. However, he adds, the film barrier also acts as an insulator, restricting airflow and limiting thermal dissipation.

Cabot has found that cooling time can be dramatically reduced through the use of the Delkor KwikCool Induction Unit.

Weiss says the KwikCool vents the film in strategic locations to allow much better airflow between wrapped containers, especially when cases are stacked on a pallet. The KwikCool Induction Unit is installed on the wrapper and punches C-shaped apertures in the film just before it is wrapped around the containers. The apertures are placed in the areas between the tapered containers commonly used for cultured dairy products. By locating the perforations where film tension is low, packaging integrity is preserved while airflow is greatly increased, Weiss says.

Randy Swartz, maintenance manager at Cabot, says several years ago the dairy company began experimenting with ways to reduce the cooling time. They installed six turbo fans that blew 32° to 33° air at the wrapped containers as they were conveyed 80 feet from packaging to pallet stack-down.
He said they tried various shippers, and found that corrugated containers took much longer to cool the product. After Cabot changed to shrink wrap, they tried drilling holes in film rolls and even designed their own system that punched out circles of film. Much of this early work was done by Dean Lafoe, a machinist at Cabot, who designed the first punch system the co-op used. 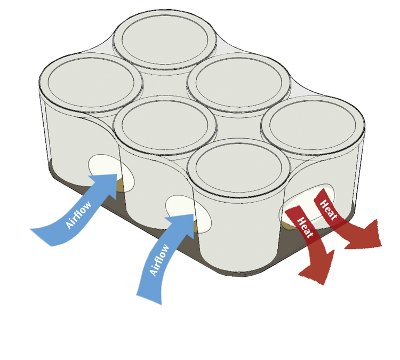 “The problem is that the holes never hit in the right space to get the heat dissipation we needed,” Swartz says. He adds that they also found that the fully punched chads of film clogged the shrink tunnel as the film melted onto the equipment.

At that point, Cabot turned to Delkor, the maker of their secondary packaging equipment. Working as partners and building on Cabot’s experience, Delkor engineers configured a system to consistently place the perforations where they are needed. The unit can be installed on any conventional shrink-wrap machine. Using an array of cylindrical cutters, Weiss says, the device punches the film while it is stationary, waiting for the next package to enter the machine.

With each stroke, C-shaped dies make the cuts, but leave a small amount of film uncut. After running through the oven, the retained cutout shrinks away, leaving no waste, Weiss says. It is also designed to keep pace with continuous packaging systems.

The Delkor KwikCool unit vents the packages similar to an induction unit on an air conditioner or furnace. It allows high-pressure refrigerated air to mix with the warm air emanating from the packaged product. As this air moves easily through the packaging, it draws away the heated air and chills the product in a process called thermal dissipation. KwikCool speeds that process.

“The intriguing piece is that we never thought we could get this much cooling efficiency just by perforating holes in the film,” Swartz says.

Weiss says Delkor already is developing a second generation of the KwikCool Induction Unit that will allow easy changes to adjust for multiple packaging patterns. It will also allow perforated tear-away strips that facilitate the opening of shrink-wrapped packaging.

“Cabot has been running these perforators every day for some time,” says Swartz. “They run very well and require little maintenance.”
The KwikCool device is in use at other major dairy facilities in different parts of the U.S. Those companies also report dramatic reductions in cooling times, with the associated boosts in productivity and energy savings.

Cabot Plant Manager Gravel points out that any company planning to add refrigerated space might be able to reduce the required space by using Delkor’s KwikCool Induction Unit. He says: “We were looking for something more economical that would work within our tight footprint. KwikCool has given us savings in so many areas.”