This website requires certain cookies to work and uses other cookies to help you have the best experience. By visiting this website, certain cookies have already been set, which you may delete and block. By closing this message or continuing to use our site, you agree to the use of cookies. Visit our updated privacy and cookie policy to learn more.
Home » Nestle builds a new line at Jamaican production facility
OperationsDairy Processor NewsDairy Processing and EquipmentProcessing
Jamaican me thirsty

Nestlé has invested in a new production line at its factory in Jamaica which makes Supligen, a milk based drink enjoyed by consumers across the Caribbean. 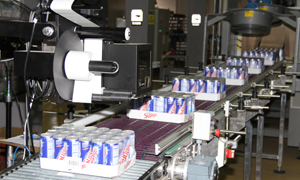 Supligen is a fortified nutritional meal supplement, marketed as a sustained energy release drink for Caribbean consumers since the late 1970s. It contains Actigen-E, a blend of complex vitamins, vitamin C and minerals, developed by Nestlé to optimise the release of energy for peak performance.The US$8 million (nearly CHF 7.5 million) investment in the company’s Bybrook factory near the town of Linstead, Jamaica, will increase production and help make the product easier to refrigerate by producing it in a new slim aluminium can.

Across the globe
“We have invested in a new production line for Supligen, responding to consumers’ increasing demand for the product,” said James Rawle, General Manager for Nestlé Jamaica. “It will be exported to several markets, boosting the Jamaican-made brand in many countries. The investment will help drive economic growth on the island and illustrates our long-term commitment to the Jamaican dairy industry’s growth and development.”

Nestlé in Jamaica
Nestlé in Jamaica will mark its 75th anniversary next year. The company formed the Jamaica Milk Products Ltd subsidiary and invested in the Bybrook factory in 1939 to produce sweetened condensed milk. The factory produces the Supligen brand, which was launched in 1976. Today the rich, milk based drink is produced in five flavours including vanilla, malt, peanut, strawberry and chocolate. The Bybrook factory produces other Nestlé products such as Betty sweetened condensed milk, Milo instant drinks, Nestlé UHT milks and Carnation evaporated milk. The site currently employs about 275 people.

Continued investment
Nestlé’s latest investment is part of the USD 36 million (more than CHF 33 million) invested in Jamaica over the past eight years. This includes a number of upgrades and modernisation to manufacturing facilities and USD 2 million (about CHF 1.8 million) for a waste water treatment plant.

Dairy farming
In Jamaica, Nestlé is providing technical assistance to nearly 30 farms in the country. This includes pasture management, farm auditing and training. The company is also working with the Ministry of Agriculture in Jamaica to further support farmers.