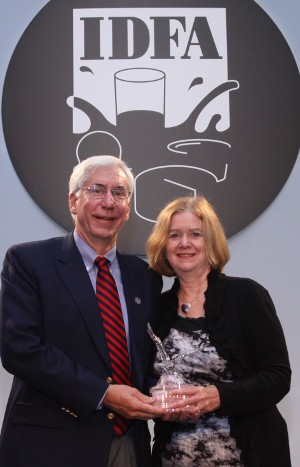 Gary Vanic, president and CEO of Great Lakes Cheese Co., received a Soaring Eagle award from the International Dairy Foods Association for his service to the industry. The Soaring Eagle award recognizes the extraordinary service of leaders in the dairy industry and those who have provided exemplary leadership to IDFA, the International Ice Cream Association, the Milk Industry Foundation and the National Cheese Institute. Vanic received the award at a special ceremony during IDFA’s 2012 Dairy Forum at La Quinta Resort & Club in La Quinta, Calif.

Perhaps one of his most important contributions came during his years at the helm of IDFA, when the entire dairy industry was reeling from turbulent economic times.

"I saw Gary go out of his way to gather information from the industry in total to try to get a good picture of the issues we needed to deal with to solve some of the complex pricing issues that are out there today," said Mike Nosewicz, IDFA chairman and vice president, Dairy East, The Kroger Co.

“Having Gary Vanic as chairman for the past two years has been a real treat for me," said Connie Tipton, IDFA president and CEO. "He's been a terrific mentor, he's solid as a rock, he's a good sounding board and he's respected by everybody.”

A video honoring Vanic is available at IDFA's YouTube channel.