September is Hunger Action Month, which is an ideal time for communities to unite in the fight against hunger and continue to make a difference by participating in this program. 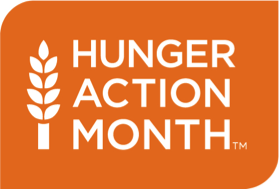 From coast to coast, thousands of families in need have benefited from milk donations to The Great American Milk Drive, the first-ever nationwide program to deliver highly desired and nutrient-rich gallons of milk to hungry families who need it. And, as an ongoing program, we have only just begun.

September is Hunger Action Month, which is an ideal time for communities to unite in the fight against hunger and continue to make a difference by participating in this program.

The dairy industry fights hunger by donating gallons of milk

The dairy industry’s efforts in fighting hunger, and specifically, helping fill a nutrient gap in America’s food banks, are so important. Findings from Feeding America’s newly released Hunger in America Study 2014, the largest study of its kind analyzing the impact of hunger on Americans today, are truly alarming. The study shows nearly 46.5 million people turn to food banks for help – that’s one in every seven people. For the millions of Americans struggling with food insecurity, the study notes opting for unhealthy foods or even watering down food and drinks are common coping strategies – strategies that directly impact health and nutrition.

But, together, we can help change the statistics. We can make a difference and impact hunger in America – we’ve already helped raise awareness and spurred more than 107,000 gallons donated to families who need it most – and it’s not over yet. Hunger Action Month is a critical phase of this already strong program that’s growing every day. This month, we’ll be hosting 15 more events in cities across the country that have been identified as markets needing the most hunger relief assistance. These events will target consumers in high-traffic areas encouraging them to donate a gallon of milk right onsite. We’ll make it easy for them, and show them the impact of their donation.

And, The Great American Milk Drive will have some key highlights during the month of September:
• A national presence at retail: Our research shows that retail is the key driver for program donations, and we’re thrilled to announce that for three weeks, from Sept. 7 to 27, the program will be featured in more than 2,000 Kroger stores across the nation.
• Local activations coast-to-coast: We’ll be hosting events in 15 top-tier markets across the country, promoting donations for Hunger Action Month in areas where we can spread our message and interact with consumers at a local level.
• Online and social presence: Social media is a key part of all of our programming and Hunger Action Month is a great time to promote milk’s message through the channel. Spread the word on social media and check out our video to get a peek inside this nationwide program.