"Larry Jensen is a team player who has always been part of successful teams," says NCI Chairman Jon Davis. 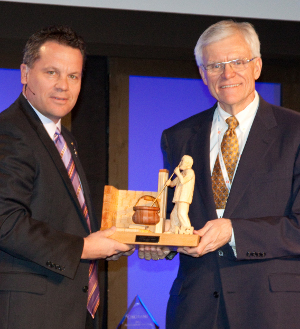 The National Cheese Institute bestowed its highest honor, the NCI Laureate Award, on Larry Jensen, president of Leprino Foods Company, Denver, Colo. (on the right in the photo, with Jon Davis). The award was presented yesterday to Jensen during a special ceremony at the International Dairy Foods Association's 2013 Dairy Forum by NCI Chairman Jon Davis, who is president and CEO of Davisco Foods International, Inc.

"Larry Jensen is a team player who has always been part of successful teams," said Davis. "He now sees himself as coach of the company that has grown to be the world’s largest producer of mozzarella cheese."

Looking back on his 30-year tenure with the company, Jensen credits passion and teamwork for his – and Leprino Foods' – outstanding success. Although the company opened in 1950 in a small Denver neighborhood market, selling grocery items and handmade cheese, it now has ten production plants in the United States and two in the U.K. through a joint venture. The newest facility, which opened in November 2011 in Greeley, Colo., will be capable of processing more than eight million pounds of milk a day.

With similar humble beginnings, Jensen employed passion, drive and skill to elevate team performance and build success wherever he went.

After graduating from the University of Missouri, Jensen worked as a certified public accountant at Price Waterhouse in 1971 and honed his teamwork skills, rising to the position of senior audit manager. He joined Leprino Foods in 1982 as the company's chief financial officer and the following year was named senior vice president of supply, distribution and business development. In 2001, Jensen took over the position of executive vice president of production and three years later was named president.

With a global team of 4,000 employees and sales to more than 40 countries, Jensen has championed global expansion and export development for the U.S. dairy industry as well as for Leprino Foods. He has fostered industry-wide efforts to elevate dairy food safety and encouraged Leprino Foods’ "Zero Tolerance" food safety initiative. He also has advanced leadership development and training, with growing success.

As the third NCI Laureate to work at Leprino Foods, Jensen continues the legacy of excellence begun by Jim Leprino and his father, Mike Leprino, Sr., and strengthened by the work of Wes Allen, 2005 NCI Laureate, and Lester Kielsmeier, 2000 NCI Laureate.

During Jensen's leadership, Leprino Foods has been recognized for industry excellence by dairy publications and organizations:

He has devoted significant time to industry organizations:

With his love of teamwork, passion for continuous improvement and drive for success, it's no surprise that he was tapped as chairman of the Innovation Center for U.S. Dairy in 2008. He continues to hold the position five years later.