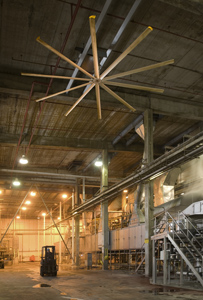 It’s not just the production of food products that matters, but the facilities in which it is processed and stored that make the difference between a fresh, quality product and the not-so-appetizing alternative. Several factors help promote product integrity within the dairy industry including automated and human handling, proper temperature and moisture control and adhering to regulated storage time. Introducing air circulation into these facilities ensures product quality from production to delivery, significantly reducing or even eliminating condensation and mold build-up which adversely affect food employee safety.

According to a recent article in Process Cooling, Mark Burrows discusses the often overlooked aspect of positive air balance within a facility, noting, “Many plants are aware that they may have unwanted condensation issues in a specific part of their plant, but they may not be aware of the origination of the problem. The integrity of safe food products can be related to proper airflow, room pressurization, balance and maintaining appropriate room conditions.”[i]

It’s easy to assume cold storage is elementary; seal and insulate the walls, install a heavy door and turn the thermostat low. However, there is much more involved in maintaining a well-chilled storage facility. Sometimes even the most carefully designed facilities can encounter problems including areas with stagnant air and ice buildup. Introducing air movement has proven to be an effective way to curtail these issues and provide a more uniform cold storage environment.

Appropriate room conditions vary depending on the product at hand, but the addition of air movement is beneficial in any environment. Take the situation within the Carberry, Manitoba warehouse of McCain foods, distributors of McDonald’s French fries and numerous other frozen food products, where condensation was causing ice to form on the ceiling – a problem which was compromising food integrity.

Air likes to flow from areas of higher pressure to areas of lower pressure. In this scenario it’s as though the process area is an inflated balloon leaking air into the freezer. “We have different air pressures in the factory. In the process area you have very moist air that is at higher pressure than the air in the freezer. What happens is that moist air comes down through the freezing tunnels and out the conveyor holes in the wall and infiltrates the freezer,” explained Chief Engineer Geoffrey Aitchison.

The facility had to shut down weekly, when workers would be reassigned to scrape the ceilings to keep ice buildup at less than two inches. McCain tried using small high-velocity fans to keep the air circulating and reduce ice buildup but they only affected a minimal area.

Instead, large diameter, low speed fans, up to 24-ft. in diameter, were installed, employing the power of air movement to thaw its facility—but not its food.

Fanning out in all directions

Unlike small ceiling fans that struggle to send air to the floor and only create insignificant pockets of air movement, large diameter, low speed fans produce a column-shaped jet of air roughly equal to the diameter of the fan. As this jet strikes the floor it spreads out in all directions, displacing the stagnant air and setting up a circulation pattern throughout the space. Air from the floor level is moved out towards the walls or obstructions and then moves up back across the ceiling into the fan to be recirculated.

After two weeks the ceiling was completely clear and it has been ever since,” Aitchison said. “The air is circulating, plus we’re warming the ceiling to the same temperature as the air, so the frost isn’t going to stay there.”

Properly engineered, large diameter, low speed fans use their immense size—not speed—to move a massive amount of air where traditional, high velocity fans are rendered ineffective. When the airfoil length is doubled you’ve increased the surface area that those airfoils sweep times four. The amount of air the fan moves increases at a much faster rate than the amount of power it takes to turn it as the size gets larger. So, with all things being equal, the fan will become more efficient as its size increases.

With great success in its freezer, McCain Foods added another 24-ft. fan to its processing area, where condensation was forming on the ceiling above a processing tank and constantly growing mold.

According to Burrows, outside air generally requires mechanical conditioning before entering a facility. “If the outside air is not cooled below the dew point of the room, the formation of condensation is likely to occur. This condensation usually forms on the ceiling of the room because air exiting the supply grill or diffuser makes contact with the ceiling, which is at a lower dew point than the supply air,” he states.

Many buildings have both the supply and return air diffusers for the heating or ventilation system located on the ceiling. While this set-up has its merits, hot air tends to collect at the ceiling level considering it is lighter than cool air. With a need for drier air at the ceiling level to prevent moisture build-up, large diameter, low speed fans successfully circulate the air in the space to create more uniform conditions throughout.

“After running up there for two weeks, it’s the driest panel in the factory now. There’s no mold growing,” Aitchison said. Just like in the freezer, the tremendous air circulation abilities of the fan kept the ceiling and air temperature consistent, preventing the moisture buildup that allows mold to form.

It’s important to choose a stainless steel fan that is UL rated to withstand frequent, intense cleanings, constructed with food-duty epoxy and other corrosion-resistant materials that prevent leakage or rust which can cause damaging effects to the products below.

Fans for the people

On the flip side, a company’s product is only as good as the people producing it, meaning if your workers are uncomfortable, product integrity is bound to wane. Regardless of the season, it’s critical for employee comfort as well to keep air moving within a facility. Studies performed in manufacturing facilities have shown that unsafe behaviors and, consequently, more accidents occur when the working environment is either too warm or too cold. Large diameter, low speed fans have proved effective in a variety of applications, providing proper air circulation regardless of the season further increasing morale and employee safety.

In the summer, the addition of air movement does not cool the air, but rather creates a cooling sensation as the breeze passes over occupants’ skin. This same breeze is realized in facilities with air conditioning, but given the cooling effect fans offer, facility managers can increase the temperature setpoint several degrees without sacrificing comfort.

To achieve this rate of effectiveness a properly engineered large diameter, low speed fan uses an airfoil/ winglet design to move air up and over obstructions. AirFences­­TM installed along the airfoil can reclaim the air sliding down the airfoil as the fan spins, redirecting air towards the floor and increasing the efficiency of the fan.

A critical factor in winter destratification, in non-refrigerant zones, is that the indoor air must be thoroughly mixed to create an even temperature. When this is done, the difference between the temperature of air near floor level and at the underside of the roof deck is generally reduced to less than 2 F.

By helping maintain consistent temperatures from ceiling to floor and wall to wall, large diameter, low speed fans are critical when it comes to condensation reduction, mold remediation and employee comfort.

Nina Wolgelenter is senior writer for Big Ass Fans. Based in Lexington, Ky., the Big Ass Fan Company is the world’s preeminent designer and manufacturer of large diameter, low speed fans for industrial, agricultural, commercial and residential use.